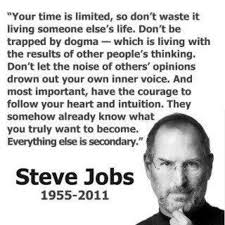 Years ago, back in 1983, (before many readers here were born) and before Apple became what it was destined become Steve Jobs knew he needed leadership that, at the time, was outside of his scope of interest and/or expertise so…he sought out a guy named John Scully who then was running PepsiCo.

“Do you want to make sugar water for the rest of your life or do you want to come with me and change the world?”

I’ve filled hundreds and hundreds of jobs during my 40 plus years in the search business and have counseled countless others toward career success and job search sanity (hoping to be around to fill a few hundred more) BUT, it’s a rare occasion where the context of the search affords an opportunity to ask that type question!

Through a fascinating series of events, relationships forged over time and coincidences I was asked to assist an old colleague and his company with their very high impact mission, that, if reached, will change all of our lives and our children’s children’s lives for the better! (Sad to say that regardless of their success it’s a bit late for my own mother)

On the surface it’s a traditional job…

If you peeled back the onion you’d find though that it really is a terrific job in it’s own right and potentially a magnificent opportunity…working for a terrific person who I’ve known for many moons who happens to be one awesome guy and one fabulous boss/mentor but this one is that much more special, that much more unique if you factor in the mission of the company.

If I’ve learned one thing during the past decades it’s that companies, initiatives, technologies and jobs come and go. The next great widget is replaced by the next great(ER) widget. BIGGER, BETTER, FASTER, MORE…Moore’s Law proving to be fascinatingly accurate!

Each proponent…each cheerleader of the afore mentioned widget does all they can to share with the rest of us just why theirs is the one!

The next wave hits and, along the way many fortune seekers follow the hypnotic vision of “sugar-plumed fairies”; that next big thing only to learn that this “next big thing” was in fact simply another SHINY OBJECT!

To be clear…I obviously do not have a crystal ball nor do I pretend to know what the next big thing is any more than you do!

Attaching your knowledge, expertise AND precious time to something that has a chance to have an impact far beyond a widget is more often than not far more fulfilling than following the crowd to the flavor of the month

I also have learned (via my own personal career successes and missteps) that every action you take…every decision you make takes your further or brings you closer to your goals and, after all aren’t we all here to accomplish our own goals

Steve Jobs said it quite well…

“Don’t let the noise of other’s opinions drown out your own inner voice. And most important, have the courage to follow your heart and intuition. They somehow already know what you truly want to become. Everything else is secondary.”

Here’s the deal anyway you slice things…regardless of this, that or whatever….

If it’s to the type of thing that might (positively) impact a significant portion of the entire world..their life span, their quality of life and the lives all of those connected to these people I REALLY hope that works out for you

I can’t know this to be so of course, but, there is a good chance that by the time you read this post I’ll have already filled the specific job referred to here. It is after all a truly great opportunity…working in a great location (Downtown San Francisco)  so along with all of the other reasons stated above that may very well be the case!

That said, the “sugar water” or “change the world” question remains for us all. It’s a decision that each of us should make consciously.

“Your time is limited – don’t waste it living someone else’s life. Don’t be trapped by dogma – which is living with the results of other people’s thinking” – Steve Jobs (again)

The TRUTH Will Set You & Your Career Free